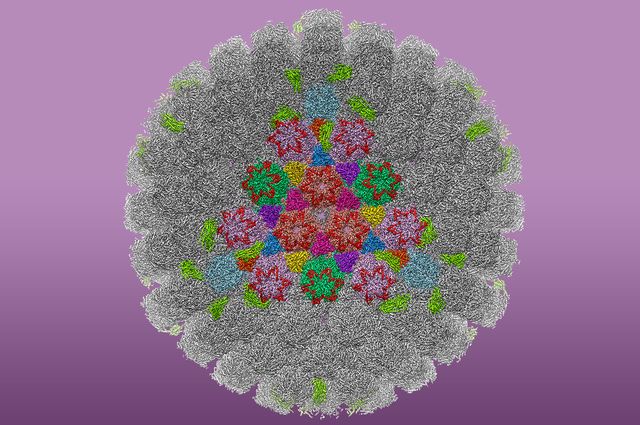 UCLA researchers have produced the clearest 3-D images to date of the virus that causes cold sores, herpes simplex virus type 1, or HSV-1. The images enabled them to map the virus’ structure and offered new insights into how HSV-1 works.

A report on the research was published online by the journal Science.

The scientists used cryo electron microscopy, or cryoEM, to obtain the first atomic model of the virus particle, which is made up of more than 3,000 protein molecules comprising tens of millions of atoms.

“We’ve known that HSV-1 can hide inside the nucleus of the nerve cell and establish life-long latent infection inside most of us,” said Xinghong Dai, a UCLA researcher and the study’s first author. “But it was unclear how the virus travels from the nucleus of a nerve cell, along the long projection called the axon, and to the skin surface where the sore occurs. This is the first time we’ve seen how those cellular transport vehicles could bind to their cargo, the HSV-1 capsid ? the protein shell of the virus.”

The study’s senior author is Z. Hong Zhou, director of the Electron Imaging Center for NanoMachines at the California NanoSystems Institute at UCLA, and a professor of microbiology, immunology and molecular genetics.

Until now, scientists were unable to produce a clear view of the virus to study its patterns and behavior. Zhou and his team used a method called subparticle refinement to enhance the clarity of selected areas of the cryoEM images.

The new method captures detailed structural information that would otherwise be hard to ascertain, in part because the HSV-1 particle is so much larger than other viruses that cryoEM imaging is typically used to study. This allowed the scientists to produce a precise visualization of the tegument proteins, which look like five-pointed stars and line the outside of the virus capsid in a regular, or highly ordered, lattice.

“The virus enters and hides inside our neurons in a dormant state, and activates to cause cold sores when our body becomes weak,” Zhou said. “These tegument proteins are involved in transporting the virus inside neurons to our lips to enable active infection.”

Herpes viruses that infect humans are classified into three subfamilies. In addition to the subfamily that causes cold sores, there is one that causes birth defects and another that causes cancer.

The viruses in all three subfamilies share similar cores, but differ in the protein coat outside the core, the tegument. Zhou said scientists have published papers on the structures of tegument proteins for the past 20 years.

“But at lower resolutions, we didn’t know exactly what those molecules were until now,” he said. “Now, we are 100 percent sure.”

Because the capsid-associated tegument complex, or CATC, has unique characteristics compared to those in the other subfamilies, it likely plays a critical role in HSV-1’s unique life cycle. By understanding the steps of this cycle through the structure, Zhou and his team gained deeper insight into how the virus infects, travels and persists in our nerve cells.

The 3-D image gives scientists an important new tool that could help point the way towards the discovery and design of antiviral medications and new treatment options for people with recurring cold sores.

The study was supported in part by grants from the National Institutes of Health and the China Scholarship Council. Instruments at UCLA’s Electron Imaging Center for NanoMachines that were used to obtain images for the published structure are supported by UCLA and instrumentation grants from the NIH and NSF.