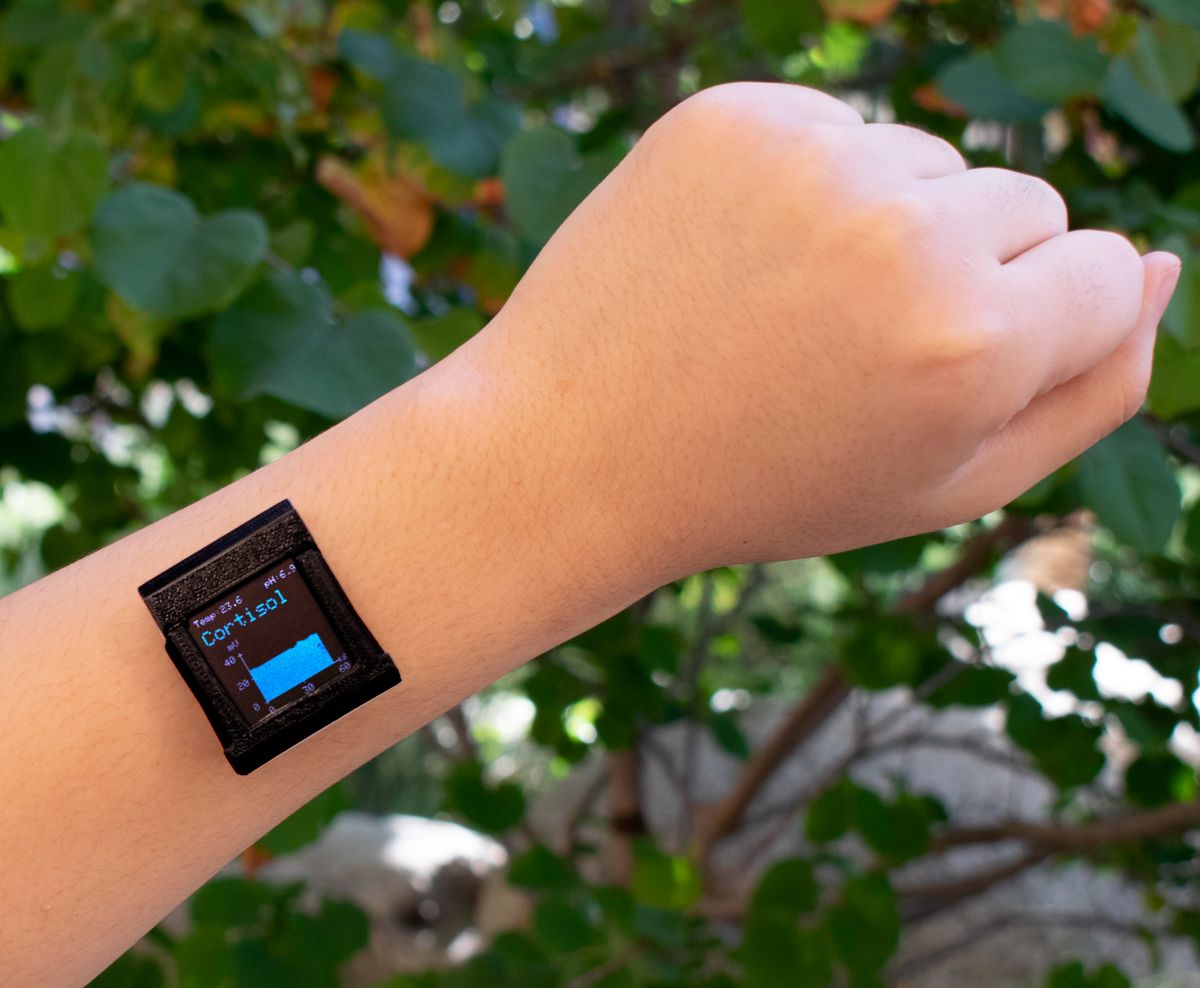 Cortisol is well-suited for measurement through wearable devices, according to study co-author Sam Emaminejad, because its concentration levels in sweat are similar to its circulating levels. (Image credit: Yichao Zhao and Zhaoqing Wang/UCLA)

The human body responds to stress, from the everyday to the extreme, by producing a hormone called cortisol.

To date, it has been impractical to measure cortisol as a way to potentially identify conditions such as depression and post-traumatic stress, in which levels of the hormone are elevated. Cortisol levels traditionally have been evaluated through blood samples by professional labs, and while those measurements can be useful for diagnosing certain diseases, they fail to capture changes in cortisol levels over time.

Now, a UCLA research team has developed a device that could be a major step forward: a smartwatch that assesses cortisol levels found in sweat — accurately, noninvasively and in real time. Described in a study published in Science Advances, the technology could offer wearers the ability to read and react to an essential biochemical indicator of stress.

“I anticipate that the ability to monitor variations in cortisol closely across time will be very instructive for people with psychiatric disorders,” said co-corresponding author Anne Andrews, a UCLA professor of psychiatry and biobehavioral sciences, member of the California NanoSystems Institute at UCLA and member of the Semel Institute for Neuroscience and Human Behavior. “They may be able to see something coming or monitor changes in their own personal patterns.”

Cortisol is well-suited for measurement through sweat, according to co-corresponding author Sam Emaminejad, an associate professor of electrical and computer engineering at the UCLA Samueli School of Engineering, and a member of CNSI.

“We determined that by tracking cortisol in sweat, we would be able to monitor such changes in a wearable format, as we have shown before for other small molecules such as metabolites and pharmaceuticals,” he said. “Because of its small molecular size, cortisol diffuses in sweat with concentration levels that closely reflect its circulating levels.” 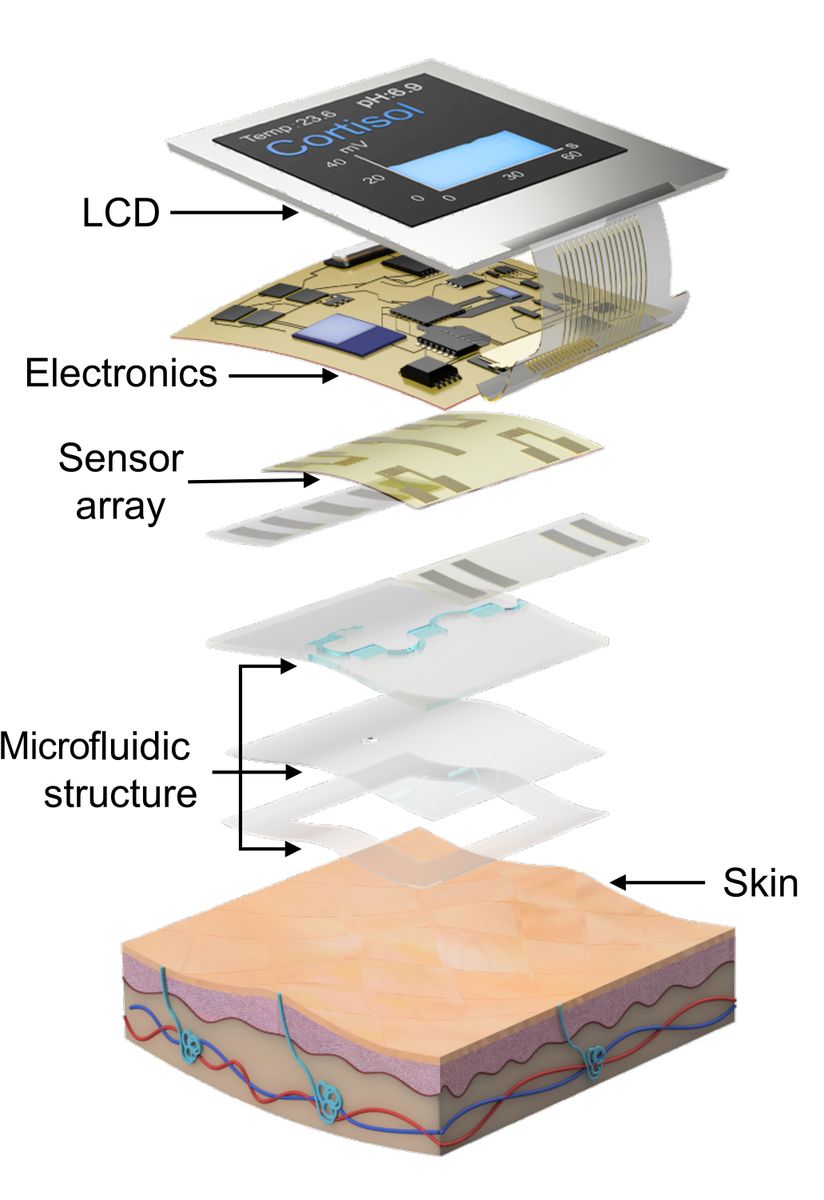 The technology capitalizes on previous advances in wearable bioelectronics and biosensing transistors made by Emaminejad, Andrews and their research teams.

The technology capitalizes on previous work by Sam Emaminejad, Anne Andrews and their UCLA research teams.

In the new smartwatch, a strip of specialized thin adhesive film collects tiny volumes of sweat, measurable in millionths of a liter. An attached sensor detects cortisol using engineered strands of DNA, called aptamers, which are designed so that a cortisol molecule will fit into each aptamer like a key fits a lock. When cortisol attaches, the aptamer changes shape in a way that alters electric fields at the surface of a transistor.

The invention — along with a 2021 study that demonstrated the ability to measure key chemicals in the brain using probes — is the culmination of a long scientific quest for Andrews. Over more than 20 years, she has spearheaded efforts to monitor molecules such as serotonin, a chemical messenger in the brain tied to mood regulation, in living things, despite transistors’ vulnerability to wet, salty biological environments.

In 1999, she proposed using nucleic acids — rather than proteins, the standard mechanism — to recognize specific molecules.

“That strategy led us to crack a fundamental physics problem: how to make transistors work for electronic measurements in biological fluids,” said Andrews, who is also a professor of chemistry and biochemistry.

Meanwhile, Emaminejad has had a vision of ubiquitous personal health monitoring. His lab is pioneering wearable devices with biosensors that track the levels of certain molecules that are related to specific health measures.

“We’re entering the era of point-of-person monitoring, where instead of going to a doctor to get checked out, the doctor is basically always with us,” he said. “The data are collected, analyzed and provided right on the body, giving us real-time feedback to improve our health and well-being.”

Emaminejad’s lab had previously demonstrated that a disposable version of the specialized adhesive film enables smartwatches to analyze chemicals from sweat, as well as a technology that prompts small amounts of sweat even when the wearer is still. Earlier studies showed that sensors developed by Emaminejad’s group could be useful for diagnosing diseases such as cystic fibrosis and for personalizing drug dosages.

One challenge in using cortisol levels to diagnose depression and other disorders is that levels of the hormone can vary widely from person to person — so doctors can’t learn very much from any single measurement. But the authors foresee that tracking individual cortisol levels over time using the smartwatch may alert wearers, and their physicians, to changes that could be clinically significant for diagnosis or monitoring the effects of treatment.

Among the study’s other authors is Janet Tomiyama, a UCLA associate professor of psychology, who has collaborated with Emaminejad’s lab over the years to test his wearable devices in clinical settings.

“This work turned into an important paper by drawing together disparate parts of UCLA,” said Paul Weiss, a UCLA distinguished professor of chemistry and biochemistry and of materials science and engineering, a member of CNSI, and a co-author of the paper. “It comes from us being close in proximity, not having ego problems and being excited about working together. We can solve each other’s problems and take this technology in new directions.”

The UCLA NanoLab, Electron Imaging Center for NanoMachines and Nano and Pico Characterization Laboratory, all housed at CNSI, provided instrumentation for the new study.